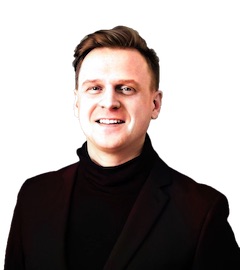 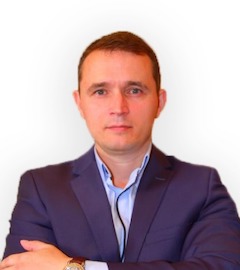 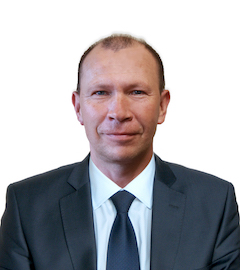 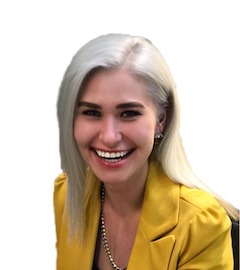 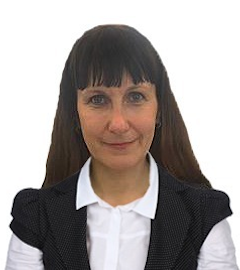 In 2019, worked as the Development Director at BerezkaGas Management LLC.

From 2015 to 2016, was the Chairman of the Strategic Committee, Member of the Board of Directors of the Bashkir Soda Company, Director of BASHCHEM.

From 2014 to 2015, was the Chairman of the Board of Directors of the Mirrico Group of Companies.

In the period from 2006 to 2013, Member of the Management Board of Sibur LLC, Head of the Directorate of Plastics and Organic Synthesis of Sibur LLC.

In 2006, CEO of Tomskneftekhim LLC. Part of the Sibur structure.

In 1997, graduated from the Samara State Economic Academy. In 2000, defended his thesis, was awarded the degree of the Candidate of Economic Sciences. In 2006, received an MBA degree from the Moscow State University.

In 1993, graduated from the Tyumen Industrial Institute, Faculty of Technical Cybernetics.

Since 2019, Advisor to the CEO for Communication of RUSSIAN PEAT COMPANY LLC.

In 2018, graduated from the RSPP Business School, Executive MBA program. For several years in a row, has been included in the Top 100 Best PR Experts of Russia rating annually compiled by Kommersant Publishing House and the Association of Managers.

From 2018 to 2019, worked as the Deputy CEO for PR and Communications in the Government of Moscow (ANO “Human Capital Development”).

From 2016 to the present, has been the leading author of the program “PROmotion with Anna Voronina” on radio and TV Mediametrics. Since that year, has been an interviewer for the Snob blog.

From 2014 to 2017, was the Head of the Press Service of the R-Farm Group of Companies and the personal press secretary of Business Russia President Alexey Repik.

From 2012 to 2014, worked as the Deputy head of Press Service, Head of PR Projects at the Agency for Strategic Initiatives to Promote New Projects. She was the Chairman of the organizing committee of the All-Russian competition “Entrepreneurship in Russia: stories, successes, problems”, organized as part of the instruction of the President of the Russian Federation Vladimir Putin to improve the entrepreneur image.

From 2011 to 2012, was the Deputy editor of the Science and Technology Department of Inews LLC, the publisher of the Izvestia social and political newspaper.

From 2008 to 2010, was a journalist for the Moskovsky Komsomolets newspaper.

From 2004 to 2011, she worked as a correspondent and screenwriter in the Administration of Public Relations of the Bauman Moscow State Technical University.

He has been the Sales Director at RUSSIAN PEAT COMPANY LLC since November 2019.

From 2018 to 2019, was the Commercial Director, Sales Director for Key Customers at Hunland-Eurasia LLC.

In 2005, was the Head of the Marketing and Analysis Service at ViA-Plus LLC.

In 2004, was the Sales Director at KONORD Plant LLC.

From 2004 to 2005, was the Head of the Marketing and Development Department at Forward+ LLC.

In 2003, was the Marketing Manager at Trade House YUKOS-M LLC.

He graduated from the Southern Federal University with honors, was awarded a Bachelor's and Master's degree in economics. He has a degree of a Candidate of Economic Sciences and an international specialization in management accounting (CIMA).

From 2011 to 2016, worked as the Executive Director of FINTECHSERVIS LLC.

In 1982, graduated from the Kalinin Polytechnic Institute with a degree in geological surveying, prospecting and exploration of mineral deposits.

From 2007 to 2010, worked as the Deputy Director of the Commercial Department, was a member of the Management Board of OJSC Rosneft.

From 2006 to 2007, was the Director for Operational Management of Terminals at YUKOS Refining and Marketing.

In 2006, was the Advisor of the CEO, Head of the Directorate for the Development and Organization of Production, Deputy CEO for the Production Development of Tomskneftekhim LLC.

From 2003 to 2004, worked as a leading specialist, Deputy head of foreign economic relations of Gossens Company LLC.

From 2000 to 2003, was a leading specialist in foreign economic activity at Roza Mira Processes LLC.

From 1999 to 2000, was a leading specialist in foreign economic activity at MIRASLAV CJSC.

In 2006, received an MBA degree from the Moscow State University.

Since June 2021, he has headed the Commercial department of the RPC.

In 2021, he worked as a Sales Director at Rublevsky Group of Companies, Moscow

In 2019, he worked as a sales director at the Tvoe LetoTrading House, Akita Group, Moscow

In 2017, he worked as a Regional Development Director at SNS Group of Companies, Moscow

In 2012, he became the Head of Business Development and Distribution at Miratorg Shopping Center, Moscow

In 2011, he was the Sales Director at Miratorg Shopping Center, Rostov-on-Don.

In 2008, he worked as a Sales Development Manager at Kraft Foods Rus, Rostov-on-Don.

In 2007, he worked as the head of the exclusive teams of Lebedyansky LLC, Rostov-on-Don.

In 2003, he worked as a sales representative for Coca-Cola HBC Russia.

Since 2020, has been the Head of the project office in Roslavl (Smolensk Region).

From 2017 to 2020, worked as an Advisor for the Director for Production Support, Capital Investment and Logistics, Deputy Branch Director for Support at SITTEC JSC (Branch in the Komi Republic, Ukhta).

From 2011 to 2015, worked as the Deputy CEO for Capital Construction, Director for Production Support at POLIEF JSC.

From 2009 to 2011, worked as the Deputy CEO for Production and Capital Construction at PLASTIC OJSC.

From 2007 to 2009, worked as the Deputy CEO for Capital Construction at TOBOLSK-POLYMER Ltd.

From 2006 to 2007, was the Advisor for the CEO, Deputy CEO for the Production Support at Tomskneftekhim LLC.

In 1996, graduated from the Perm Polytechnic Institute with the qualification of Mechanical Engineer, in 2012 - the Perm Institute of Municipal Management with a degree in Organization Management.

From 2013 to 2020, worked as the Production Director at Pelgorskoye-M LLC.

In 2013, worked as the Head of the Production Technology Department at Pulkovo-Tsvety CJSC.

From 2011 to 2013, worked as the Development Director at SevZavAgro LLC.

In 2011, worked as the Sales Manager at North-West Chemical Company CJSC.

From 2009 to 2010, worked as the Chief of the Agrotechnological Department – Head of the Testing Analytical Laboratory at Pelgorskoye-M LLC.

2015 - Japan, Tokyo. Practice in production - lean manufacturing, a diploma on an internship in the Kaizen system.

Advisor to the CEO

Since 2019, Advisor to the CEO of Russian Peat Company LLC

From 2017 to 2019, worked at SOCAR RUS as the chief specialist in foreign economic activity. Engaged in transshipment of petroleum products and attracting new customers.

From 2014 to 2017, worked in the Chernomorservis Company in the Logistics Department. He was responsible for the transshipment of petroleum products and the workflow of supporting documents.

In 2010, graduated from the Department of Business Management at Regent's University London in the UK.

In 2014, received a Master’s degree in oil and gas at Regent's University London.

2009 - graduated from Heilongjiang State University (PRC) with a degree in international economics and trade.

2011 - received the Master's degree from Harbin State University (PRC) upon graduation from the Faculty of International Law. Also received a diploma of additional professional education under the program "World Politics" at the Diplomatic Academy of the Ministry of Foreign Affairs of the Russian Federation.

Has over 10 years of experience in GR, foreign economic activity (China) and organization development. Knows the peculiarities of the mentality and legislation of the two countries, which will allow the RPC to conquer the large Chinese market.

From 2012 to 2015 - held the position of Head of Administration of the Management Board of ICBC Bank.

From 2016 to 2018 - Asset Management Advisor of M.Yu. Vorobyov, co-owner of PJSC Russian Aquaculture.

Before joining the company, worked as Project Manager in the JSC SOGAZ insurance company.

She was born in 1979 in the village of Birikchul, Khakass Autonomous Region.

In 2001, she graduated from the Khakass State University. Katanova majored in "scientist agronomist".

Lyubov joined RPC in July 2020 as Chief agronomist. She linked her career with agronomy more than twenty years ago. Since 2001, Lyubov has worked as a nutrition agronomist at the vegetable growing company Adamant LLC, where she reached the position of chief agronomist.

She worked as a chief technologist and agronomist in companies, including LLC "Flower World", nursery "Siberian Garden", LLC "Adamant" and LLC "Veltorf".

Was born in 1976 in the village of Desna, Chernihiv region of Ukraine.

Graduated from the Faculty of Law of the Modern Humanitarian University and received an MBA degree at the Moscow Business School.

Has vast practical experience in the development and implementation of companies’ development strategies.

Prior to joining the company, worked for more than 10 years at the Garden Retail Service (Fasco), where he held positions related to operating activities and production development.

In his opinion, the important tasks include the efficient implementation of strategic goals and key initiatives, maximization of the return from investment projects, development of industrial peat clusters and, above all, achievement of leadership in the peat industry.

His free time he devotes to the relatives, cooking and active sports. He is a very enthusiastic person - in 2016, he summited Elbrus, made a parachute jump, and visited more than 30 countries.